Description of roles and tasks:
LEGO dimensions is a vast project, consisting of a variety of loads of different IP's which is a challenging but fun experience. I have worked across the majority of IP's, levels and cutscenes. My main role during the dimensions project was tasked with the challenges faced with a new type of vehicle called Tag Items, the digital vehicle representation for the toy-to-life products. These had far more complicated setups than we were used to due to a variety of new mechanics we had never implemented before. I had a strong involvement in the development for these, involving planning and documenting the teams setup process, with simple mel scripts to aid the workflow of teammates, also liaising with multiple departments such as programming and design.
I also continued to output more high quality content into the game too, working on the LEGO Joker Robot, the LEGO staypuft character, the level art for two levels in game that were comprised entirely of LEGO surfaces, amongst a wide variety of other objects and vehicles ingame. Part of my increased responsibilities in the senior role are ensuring tasks are organised, correctly setup and handed out to team members with sufficient information. During this I have gained considerably strong knowledge of bug management systems.

The Joker Robot was one of the main bosses during the gameplay storyline for both LEGO dimensions, and also LEGO Batman 2, where it was originally

featured. I completed all of the modelling, texturing and setup for this character, based off a design by the LEGO artist. 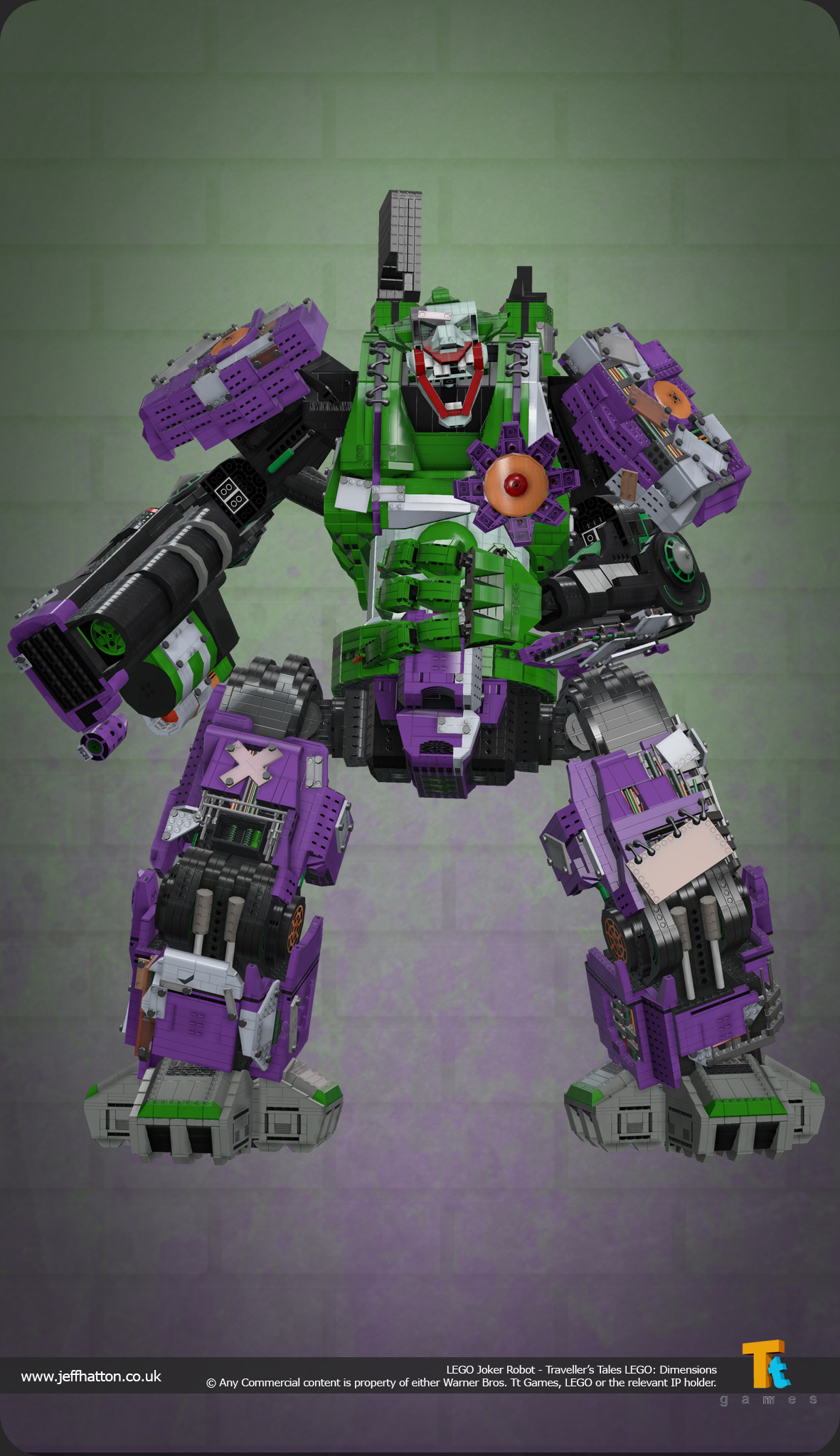 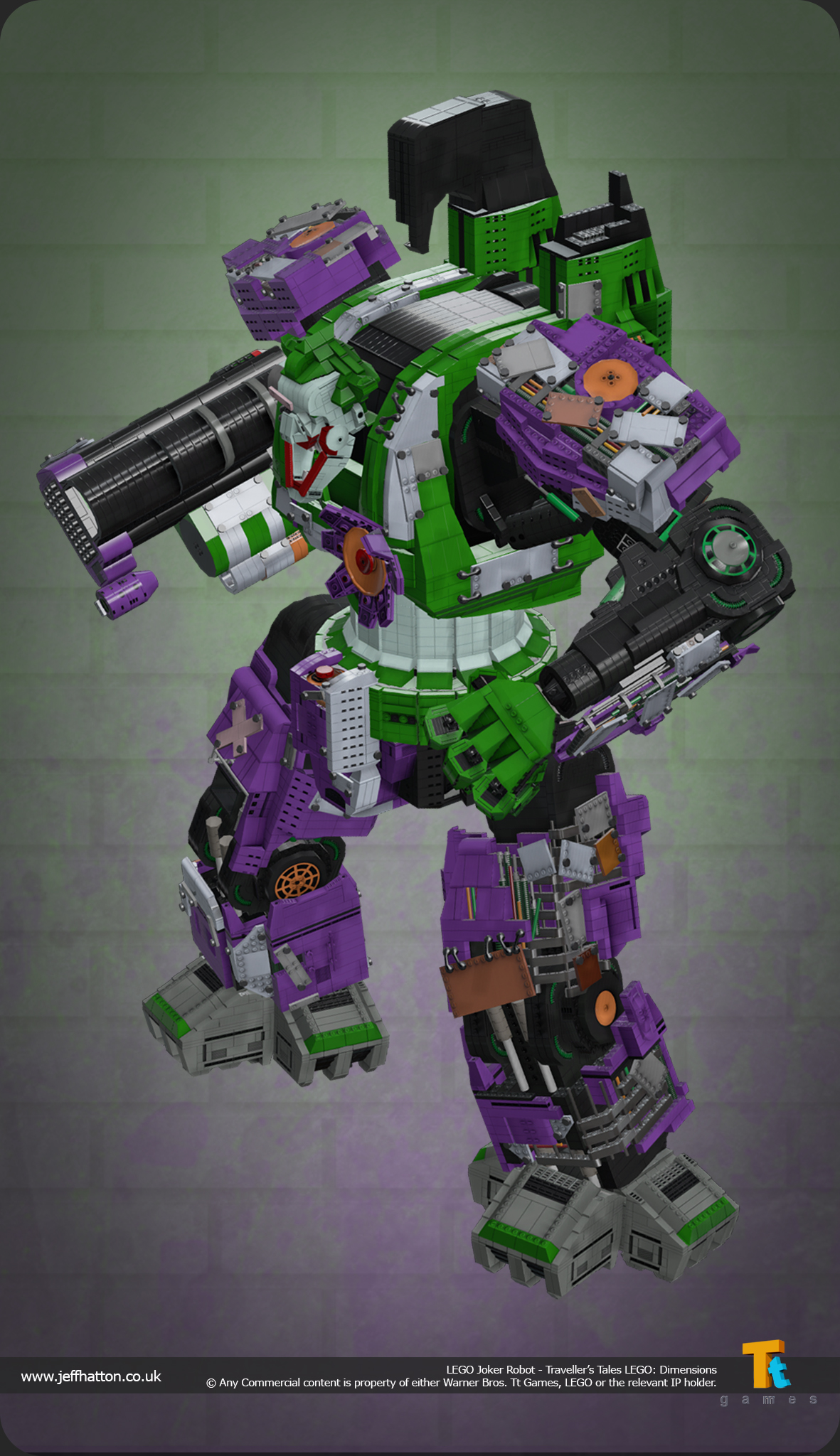 Large scale LEGO boss character that I created, this time for the Ghostbusters DLC pack. This character was featured in cutscenes and ingame, so had

multiple face swap expressions, plus various stages of visual burning damage. I again was responsible for all of the modelling, texturing and ingame

setup work for this character. 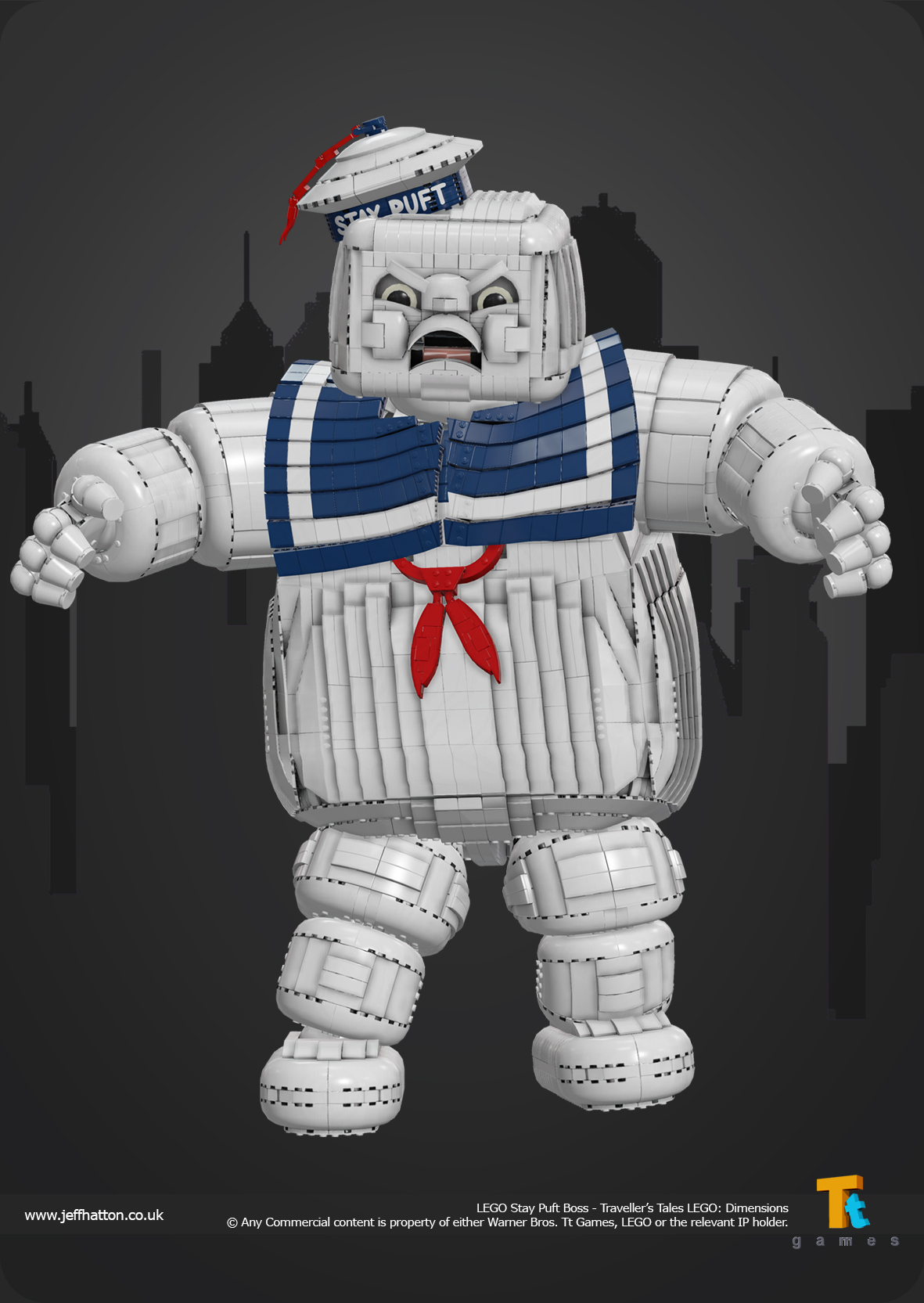 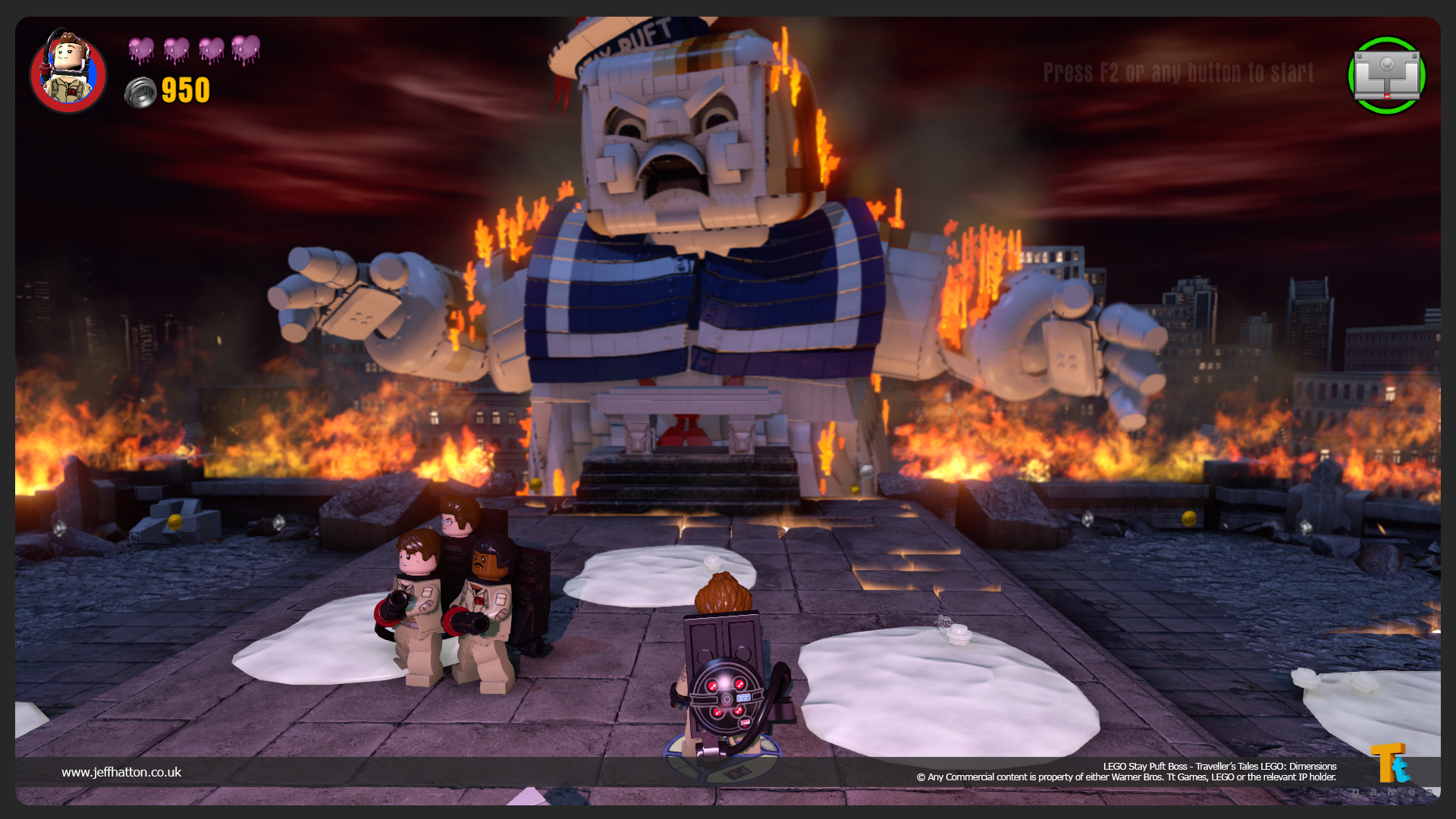 Vorton Palace was LEGO style level art completed for the Dimensions project. It is the self-building palace of the main villian ‘Lord Vorton’. This level was

featured in two levels of the game in it’s two different forms: ‘Foundation Prime’ and ‘Final Dimension’. I was responsible for the modelling, texturing and

ingame setup, working with multiple other departments in the process. 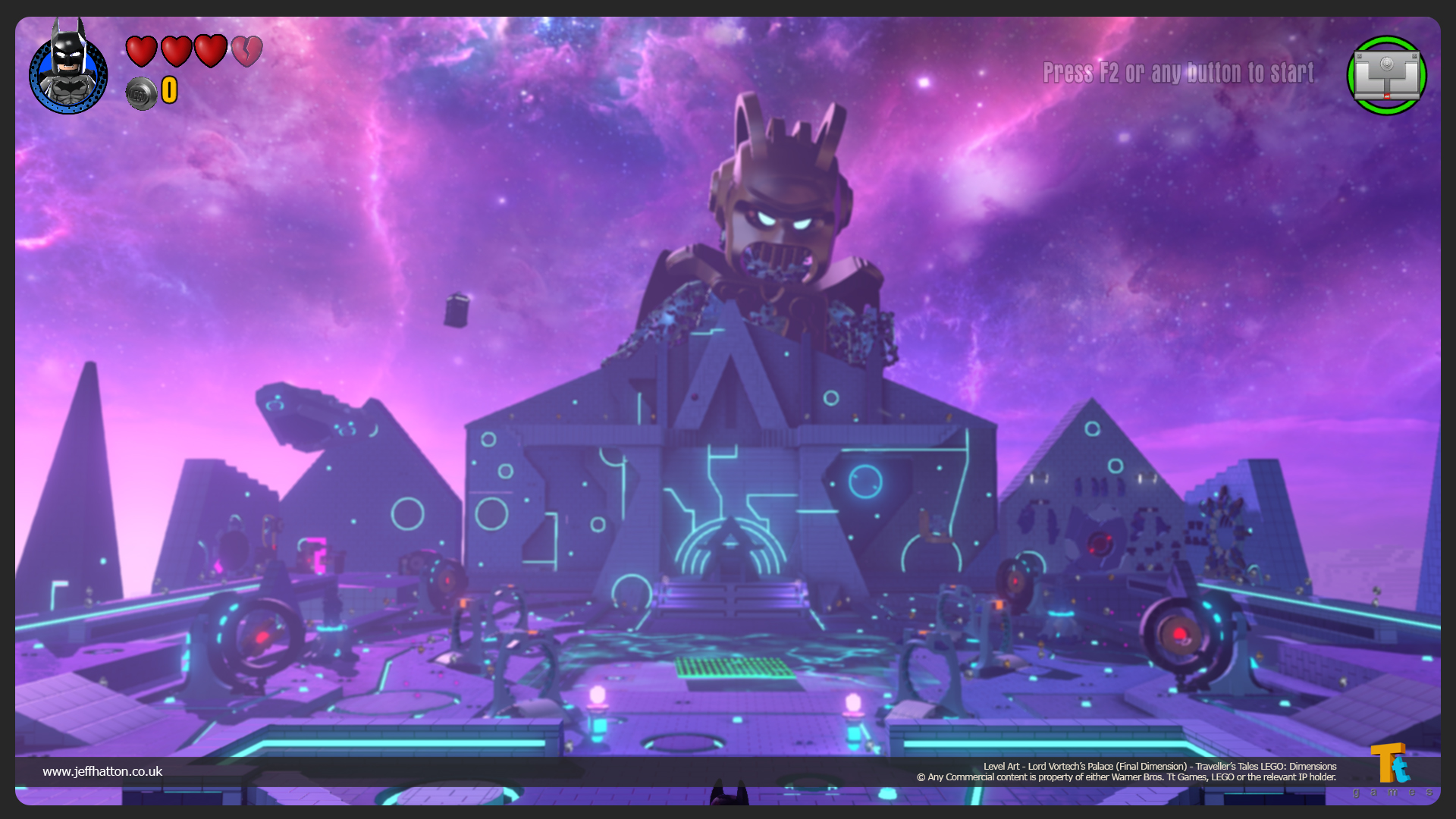 A compilation of all the aforementioned 'tagitem' vehicles. Responsibility is shared across the entire team for the creation and ingame setup of these

these vehicles, working alongside multiple other departments.

Personally, I was particularly responsible for the development, planning and workflow of the customisation systems, along with some MEL scripting of

tools for the team to aid the development. 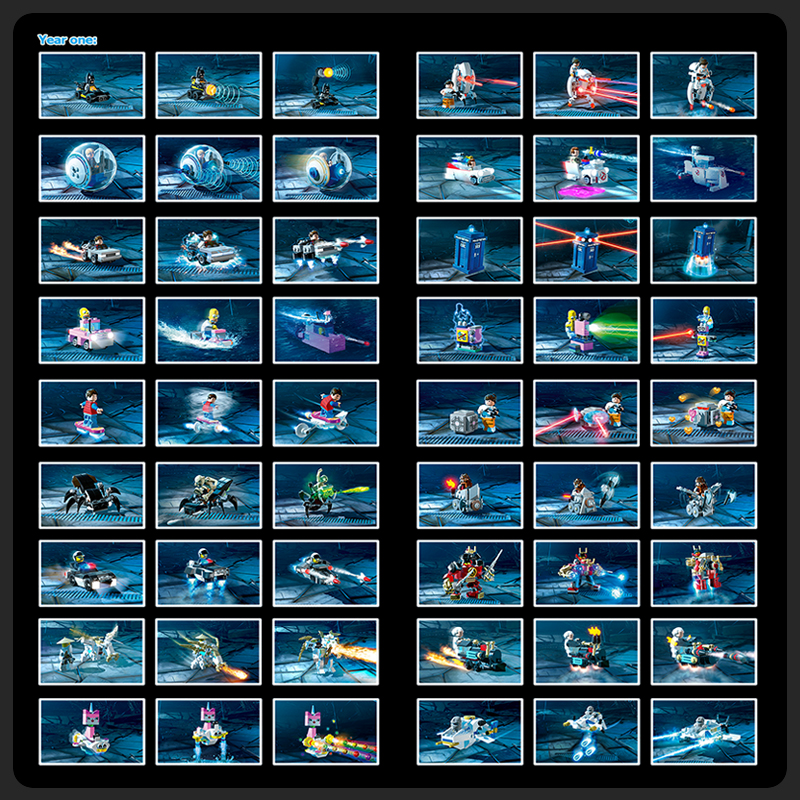